However, this enzyme is only prevalent in the small intestine of older, sicker animals and humans.

The Slc12a8 enzyme was just discovered because it plays a very minor role, and does not transport a large enough quantity of NMN to have been noticed earlier.

It has long been noticed that a small quantity of NMN can reach the bloodstream in minutes. The answer on how this happens was revealed in a  study published Jan 2019 that shows the newly identified Slc12a8 protein can transport NMN to NAD+ in the small intestine, avoiding digestion to NAM.

It does not seem to be a significant amount

The study  does not publish results showing  HOW MUCH NMN the Slc12a8 enzyme can transport, but all previous studies such as the Liu research  could not find evidence of any NAD+ at all that was created through this pathway.

According to the authors:

It must also be noted that Slc12a8 transporter is most prominent in the small intestine, but does not have a pathway to the rest of the body.

There is hope Slc12a8 can be useful in future products

Future products may soon hit the market that target this pathway to help solve the bioavailability problem of NMN capsules. According to the study:

“Dr Imai’s lab already has identified small molecules that can stimulate production of the Slc12a8 NMN transporter, applied for patents, and licensed this technology to a company in Japan”

For now though, you can avoid having your NAD+ or NMN get digested by taking it sublingually – more about sublingual delivery –

More details about the research

Remarkably, the function of the Slc12a8 NMN transporter becomes crucial in aged individuals compared with young ones. In response to significant decreases in NAD+ levels, the aged ileum upregulates Slc12a8 expression and tries to maintain its NAD+ levels

When enough NMN is supplied, this feedback system can function adequately to maintain levels of NAD+ comparable to those in young

This research published Jan 7 2019 solves a mystery that has been the focus of intense speculation by scientists in this field for several years – how NMN enters the cell in order to become NAD+ and that it does not need to convert into NR (Nicotinamide Riboside) to do so.

Some key finding from this research:

Nicotinamide adenine dinucleotide (NAD) is a coenzyme found in all living cells. It is a dinucleotide, which means that it consists of two nucleotides joined through their phosphate groups. One nucleotide contains an adenine base, and the other contains nicotinamide.

NAD facilitates redox reactions, carrying electrons from one reaction to another. This means that NAD is found in two forms in the cell; NAD+ is an oxidizing agent that takes electrons from other molecules in order to become its reduced form, NADH. NADH can then become a reducing agent that donates the electrons it carries. The transfer of electrons is one of the main functions of NAD, though it also performs other cellular processes, including acting as a substrate for enzymes that add or remove chemical groups from proteins in post-translational modifications.

Evidence suggests that NAD+ systemically declines with age in a variety of organisms, including rodents and humans, which contributes to the development of many age-related diseases and metabolic conditions.

In the last few years a number of studies have reported that NMN conveys remarkable effects of improving disease conditions and mitigating age-associated physiological decline 5,11,12,13,14,15,16,17,18.

Nicotinamide adenine dinucleotide (NAD+) biology has seen a great deal of interest in the last few years, partially due to the discovery of two precursors of NAD+ biosynthesis, nicotinamide riboside (NR) and nicotinamide mononucleotide (NMN), which both increase NAD+ in the cells of multiple tissues. 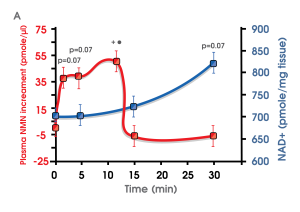 Dr Imai and his team long suspected there was a direct route for NMN to get into cells because  NMN make the journey from the gut into the bloodstream and then into cells throughout the body within minutes much faster than has been observed in studies with NR, so Dr Imai was convinced there must be a direct route from external NMN and across cellular membranes.

In this earlier study by Dr Imai and team published in 2016, mice were given a single dose of NMN in water.

Slc12a8 is likely the reason NMN uptake is so quickly converted to NAD+.

The current study found mice that have the Slc12a8 gene “Knocked Down” (Slc12a8-KD), do not have the same speedy utilization.

Pathway is specific for NMN – not for NR

Researchers used double labeled molecules of NMN, NR, and other NAD+ metabolites to trace the uptake into the cells.

Treating cells that overexpress the Slc12a8 gene with NMN results in uptake of approximately 4x  more NMN inside the cells.

Treating the same cells with NR results in NO increase in NMN inside the cells.

In fact, even NAMN, which is nearly identical to NMN was not transported into the cells, confirming that this transporter is specific for carrying NMN across the cellular membrane.

“Here we show that the Slc12a8 gene encodes a specific NMN transporter. “

“We further show that Slc12a8 specifically transports NMN, but not nicotinamide riboside”

The researchers were able to stimulate the Slc12a8 gene to “turn up” the quantity of Slc12a8 protein. This chart shows the increased NMN found in cells that “overexpress” the gene.

With this in mind, Dr Imai’s lab already has identified small molecules that can stimulate production of the Slc12a8 NMN transporter, applied for patents, and licensed this technology to a company in Japan called Teijin Limited.

Upregulated in older animals to compensate for decreased NAD+

After mice were given oral gavage of 500 mg/kg NMN, intracellular NAD+ levels in small intestine of old mice were higher than that of young mice indicating that the upregulation of Slc12a8 plays an important role in counteracting age-associated NAD+ decline in the small intestine.

“expression of the Slc12a8 gene is upregulated in response to NAD+ decline, allowing cells to meet to an urgent demand for NAD+ biosynthesis”

Most prevalent in small intestine, liver, pancreas, and fat cells

Most of their test were with small intestine, as that is where Slca18 is most abundant, but is also found in liver, pancreas, and fat cells:

They also did some studies with liver cells that show a 90% reduction of NMN uptake with Slc12a8 Knockout:

More Quotes from this research

In vivo validation of the NMN transporter

orally administering NMN (500 mg per kg body weight) to those mice, plasma NMN levels significantly increased at 5 min in the control mice, whereas they did not increase at all in the Slc12a8-KD mice

Instead, plasma nicotinamide levels tended to be higher

We found that the jejunum and ileum in 24-month-old mice also showed NAD+ decreases compared with 2-month-old mice. Consistent with this phenomenon, Slc12a8 expression was also significantly upregulated in the aged ileum

After NMN oral gavage, NAD+ levels were also increased in aged mice to levels close to those observed in young mice (Fig. 4e)

Slc12a8 KD to test importance in young vs old mice

Significant NAD+ decreases were detected in the ilea of the aged, but not young, Slc12a8-KD mice

This study (Liu,Rabinowitz) published in March 2018 showed that nearly all NMN and NR taken orally is degraded to NAM in the GI tract and liver, with none being delivered intact outside the liver.

A few points that may explain this appearant discrepancy:

Discovery of this dedicated NMN transporter is intriguing, however
this study did not attempt to quantify the NMN that makes it to NAD+ intact thru the Slc12a8 transporter.

The authors do not in any way imply that ALL NMN supplements might be able to utilize this pathway.

Dr Sinclair, in this review of the Imai research says:

We do not know:

Why we need to use Sublingual Delivery for NMN

Our knowledge of NAD+ biology continues to grow, and, no doubt, more surprises are in store down the road as the NAD+ story continues to evolve.

We now have proof there is a dedicated NMN transporter, itis upregulated in older animals to compensate for low NAD+ levels, and it is likely thereason NMN is found tobe metabolized to NAD+inside cells so much more quickly than NR.

But we do not know what percentage of any NMN supplements might be able to utilize this pathway to NAD+.

We also don’t know how effectively the body can transfer NAD+ from the small intestine to other tissues throughout the body.

NMN doesn’t require Slc12a8 to enter cells.It is an alternate pathway that is specific for NMN and most prevalent in small intestine, liver, and pancreas.

In some cells without Slc12a8, NMN needs to lose a phosphate (be converted to NR) to enter.However, that does not impede it from entering.

NMN uses a protein it finds readily available at the cell membrane to discard the phosphate.

It is not really an impassible barrier to entry that Chromadex likes to portray, but more like a checkpoint.Maybe like you are at a friends house, and need to remove your shoes before entering.

In a test tube, NR is faster to enter cells.But in vivo, it’s not.Taken in water or gavage, they raise NAD+ in the liver nearly the same amount at the same speed.

Taking NMN sublingual may put 30% or so in the blood in minutes, where it can enter cells throughout the body.If you swallow a capsule of NR , it takes and hour or more to go thru liver before some very small % can reach the bloodstream.

Now we know that with Slc12a8, some % of NMN can be converted to NAD+ in the small intestine, much quicker than NR from the liver.But we don’t know what % that is, and likely HUGE variation in it.

Prior to this new discovery, it was generally thought that NMN could not enter the cell directly and that it had to convert back into NR in order to do so.

We now know this is not true, and there most definately IS a dedicated transporter that is specific for NMN.

Without the Slc12a8 transporter,NMN capsules suffer the same fate as NR, and are almost completely digested to NAM in the stomach and Liver (Liu,Rabinowitz)

If the Slc12a8 protein is stimulated (as in older animals), some of that NMN can be transported directly into cells intact and increase NAD+.

However, there is no reason to believe that Slc12a8 can process all NMN that passes through the small intestine and liver – Sublingual delivery may be more effective capsules.